4.5.3 The project manager shall test the software against its requirements.

A best practice for Class A, B, and C software projects is to have formal software testing planned, conducted, witnessed, and approved by an independent organization outside of the development team.

Click here to view the history of this requirement: SWE-066 History

Per section 3.2 of the IEEE 730-2014 IEEE Standard for Software Quality Assurance Processes 469, “software testing is an activity in which a system or component is executed under specified conditions, the results are observed or recorded, and an evaluation is made of some aspect of the system or component.” Per the ISO/IEC TR 19759:2005 Software Engineering -- Guide to the Software Engineering Body of Knowledge (SWEBOK), software testing is “the dynamic verification of the behavior of a program on a finite set of test cases, suitably selected from the usually infinite executions domain, against the expected behavior.”

Software testing is essential for the following reasons:

One intent of software testing is to test all paths through the code—every decision and nominal and off-nominal path—by executing test cases.  Code coverage metrics identify additional tests that need to be added to the test run. Code coverage tools monitor the path the software executes and can be used during test runs to identify code paths that were not executed by any test.  By analyzing these missed areas, tests can be identified and implemented to execute the missed path.  It is challenging to get 100% coverage due to off-nominal and hardware issues not possible or not advisable to execute during a test run (e.g., radiation effects, hardware failures).  Code coverage metrics can also identify sections of orphaned or unused code (dead code).

Code coverage can require the code to be compiled and instrumented in a specific manner and then executed in the test environments to indicate the code coverage of the tests.  This instrumentation invalidates any functional acceptance testing so that acceptance testing would require test runs without modification.  Code coverage should be verified as part of the in-line development test schedule.  Code coverage of software-only unit tests would minimally impact the in-line development test schedule and be recorded as part of the code coverage metrics. New hardware-only coverage tools can provide the metrics without intrusive instrumentation of the code.

Consider using code coverage as a part of a project’s software testing metrics.  Code coverage (also referred to as structural coverage analysis) is an important verification tool for establishing the completeness and adequacy of testing.  Traceability between code, requirements, and tests is complemented by measuring the structural coverage of the code when the tests are executed. Where coverage is less than 100%, this points to:

Per NASA-GB-8719.13, NASA Software Safety Guidebook 276, "Testing serves several purposes: to find defects; to validate the system or an element of the system; and to verify functionality, performance, and safety requirements. The focus of testing is often on the verification and validation aspects. However, defect detection is probably the most important aspect of testing. While you cannot test quality into the software, you can certainly work to remove as many defects as possible."

In mind, formal testing, such as acceptance testing, is witnessed by an external organization, such as software assurance (see NASA-STD-8739.8, Software Assurance, and Software Safety Standard 278).

"Scheduling testing phases is always an art and depends on the expected quality of the software product. Relatively defect-free software passes through testing within a minimal time frame. An inordinate amount of resources can be expended testing buggy software. Previous history, either of the development team or similar projects, can help determine how long testing will take. Some methods (such as error seeding and Halstead's defect metric) exist for estimating defect density (number of defects per unit of code) when historical information is not available." (NASA-GB-8719.13, NASA Software Safety Guidebook 276)

NASA-GB-8719.13, NASA Software Safety Guidebook 276, includes a chapter on testing with a focus on safety testing. Some general testing highlights of that chapter include:

Other useful practices include:

While NASA Centers typically have their procedures and guidance, NASA-GB-8719.13, NASA Software Safety Guidebook 276,  lists and describes the following testing which needs to be considered when planning any software test effort:

The following chart shows a basic flow for software testing activities from planning through maintenance. Several elements of this flow are addressed in related requirements in this Handbook (listed in the table at the end of this section). 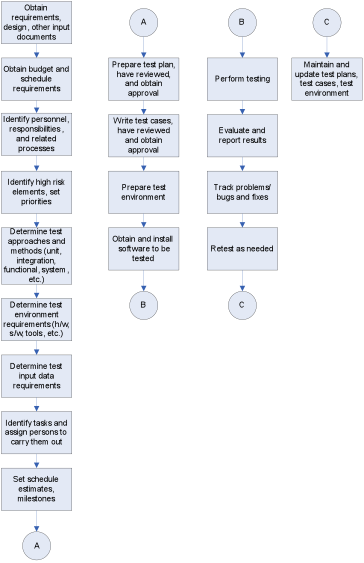 Tools that may be useful when performing software testing include the following non-exhaustive list. Each project needs to evaluate and choose the appropriate tools for the testing for that project.

NASA-specific planning information and resources for software testing are available in Software Processes Across NASA (SPAN), accessible to NASA users from the SPAN tab in this Handbook.

Additional guidance related to software testing, including specifics of the plan, procedure, and report contents, may be found in the following related requirements in this Handbook:

Software testing is required regardless of project size.

The list is informational only and does not represent an “approved tool list”, nor does it represent an endorsement of any particular tool.  The purpose is to provide examples of tools being used across the Agency and to help projects and centers decide what tools to consider.

The NASA Lessons Learned database contains the following lessons learned related to the importance of and potential issues related to software testing:

SWE-066 - Perform Testing
4.5.3 The project manager shall test the software against its requirements.

Objective evidence is an unbiased, documented fact showing that an activity was confirmed or performed by the software assurance/safety person(s). The evidence for confirmation of the activity can take any number of different forms, depending on the activity in the task. Examples are:

Note: Metrics in bold type are required by all projects

In projects with safety-critical code, software assurance will perform extra rigor to ensure that all safety-related features are thoroughly tested. This may involve witnessing the tests or doing a more thorough review of the test results to check that all safety features have been tested successfully. In many cases, the requirements for the specific safety features are captured in the hazard reports, so it is important to ensure all of these safety features have been included in the trace to tests. Tests for safety features should include testing in operational scenarios, nominal scenarios, off-nominal conditions, stress conditions, and error conditions that require bringing the system to a safe mode.

Projects should do regression for any changes made to the software during the test process, following the project’s change management process. Tests including any safety features should be part of the regression test set. See SWE-080 for tracking and evaluating changes and SWE-191 for regression testing.