Skip to end of metadata Go to start of metadata
8.1 - Off Nonimal Testing
Web Resources

Guidance focusing on out of bounds parameters, failure scenarios, unexpected conditions, and capabilities that are typically considered as "must not work" functions.

Off-nominal behaviors (ONBs) are unexpected or unintended behaviors a system may exhibit. They arise when unexpected external stimuli, such as unpredicted sequences of events, out-of-range data values, and environmental issues (e.g., unexpected issues related to hardware, memory, and network) disrupt a system. It is commonly thought that critical ONBs lack identification and testing coverage. Occurrences of ONBs can compromise the safety and reliability of a system, which can be very dangerous in safety-critical systems like NASA’s spacecraft, where software issues can lead to expensive mission failures 622, 624 injuries, or even loss of life 625. To ensure the safety of the system, engineers must identify potential causes of ONBs, and the system must specify and verify the handling of ONBs.

Engineers often treat Off-nominal behaviors (ONBs) as an afterthought. The causes of ONBs and how the system should react to ONBs often are nonexistent, incomplete, or vague in project documentation, including design, requirements, and tests. The lack of documentation on ONBs makes testing the system much harder. To address this problem, engineers can understand the notion of ONBs based on whether the system functions correctly and whether all system behaviors are specified or documented explicitly. See the categorization scheme shown in table 1 below.

Good behavior: Good behavior encompasses all behaviors that function correctly. Engineers can trace back the behaviors in this category to a requirement or design artifact. This is the nominal behavior of a system.

Bug/defect: Bugs or defects are issues in a system (e.g., due to incorrect implementation) that are traceable from the intended/correct behavior to a requirement or design artifact. These are considered ONBs because these behaviors are not intentional and cause the system to behave in an incorrect way. These behaviors violate the requirements and design documents, which formalize the intentions and expectations.

Surprise: The surprise category contains behaviors that function without detrimental effects on the system and serve a distinct purpose but are not documented in the requirements. These are ONB because the behavior is undocumented. This class of behaviors is often overlooked; instead, the focus is on behaviors that tend to have detrimental effects on the system. However, undocumented good behavior can be problematic as well. For example, a back door that provides a utility to the developers and testers of the system can become a security vulnerability. System behavior that is not well-documented also can create problems if the system has to be maintained or extended. Developers could, for example, alter or remove undocumented behaviors without realizing it.

The first step to managing ONBs is to identify off-nominal scenarios and specify their expected behaviors during the requirements elicitation phase. Engineers or system analysts can leverage several of the following requirements engineering methods to identify ONBs:

Just by conducting requirements engineering, engineers cannot ensure that all ONBs will be identified because they cannot feasibly enumerate all of the many potential causes of ONBs. Rather, engineers need a complementary approach that leverages artifacts from the testing process (e.g., models, source code, executables of the system, or executable models) as well as execution data from test case executions or log files).

Robustness testing is a testing method and approach that focuses on verifying and validating the system’s ability to operate correctly or safely or to degrade gracefully in the presence of exceptional or unforeseen scenarios (e.g., invalid or unexpected input, network failures, hazardous environment conditions). What differentiates robustness testing approaches are the methods of choosing or generating input (including simulating stressful conditions) to provide to the system under test.

Fuzz or fuzzy testing is a class of robustness testing that focuses on providing randomly generated data as (sequences of) input to the system. The data provided are typically, but not limited to, invalid and unexpected input for the purpose of identifying a system’s vulnerability related to boundary values and insufficient validation of input. The latter vulnerability, especially, can lead to security breaches (e.g., Structured Query Language injection attacks, memory leaks). Multiple approaches exist for generating the input values: 1) mutating an initial sample of input randomly or semi-randomly using heuristics or 2) generating the values based on specifications or models of the input.

Model-based testing is an approach where the engineers or testers create a model of a system, usually represented as a finite state diagram, from existing specifications, and generate test cases systematically to ensure sufficient coverage of the model and, therefore, the system behavior. Studies 633, 634, 635 have shown that model-based testing to be an effective and efficient testing approach 633, 635, 636. Engineers can apply model-based testing to test the system’s off-nominal behaviors; however, the approach requires that the testing model also includes ONBs. Manually constructing testing models that include ONBs (an off-nominal model) can be time-consuming and error-prone due to a large amount of the potential the off-nominal behaviors. Instead, engineers can implement a tool to create an off-nominal model automatically from an existing nominal model following these steps: 1) the algorithm iterates through each state in the nominal model (with the exception of the start and potential exit states); 2) in each state, the algorithm compares the outgoing transitions to the list of all possible transitions and adds all unspecified transitions to the state; 3) the algorithm then generates a test case for each of the newly added transitions and executes it. If the execution of the test case reveals that the transition is not feasible, the algorithm will remove the transition. Otherwise, the algorithm will add the transition as a loop to its state of origin. This represents the behavior where the system ignores an illegal or invalid input (e.g. a command) and, therefore, it does not affect or change the state of the system. If the test execution incorrectly changed the state, then the test case will fail and detect an ONB.

The testing framework for model-based testing that can be used to test for off-nominal behaviors (ONB) consists of two components: yEd  638, which is a graphical editor used to model the behavior of the system under test as a black box, and the Fraunhofer Approach to Software Testing (FAST) tool, which generates test cases from such models. The modeling part is agnostic to the underlying technologies used to implement the system under test. FAST has been used to test web-based systems and other systems implemented in C/C++, C#, Python, Java, etc. A test execution framework such as Junit 639 is necessary to execute the generated test cases. The topic of test execution frameworks is, however, out of scope in this context.

The yEd tool is freely available. Fraunhofer has uploaded the FAST tool to NASA NEN together with a complete tutorial on how to use yEd and FAST to model and generate test cases. The tutorial package includes a set of models that can be used to experiment with the toolset. To illustrate the full life cycle from creating a test model to running test cases that can find defects in the system under test, a full example including links to the Selenium 641 testing framework is included. The generated test cases run immediately without any editing in the Selenium integrated development environment. Please forward any questions on FAST and the tutorial to mikli@fc-md.umd.edu.

The list is informational only and does not represent an “approved tool list”, nor does it represent an endorsement of any particular tool.  The purpose is to provide examples of tools being used across the Agency and to help projects and centers decide what tools to consider.

Lessons that appear in the NASA LLIS or Center Lessons Learned Databases.

Lessons that appear in the sources outside of NASA Lessons Learned databases.

INVERSE CHARACTERISTIC: In mathematics, an inverse function (??−1(??)) is a function that "reverses" another function (??(??)). Examples of this are the functions publish and getMessage from the Goddard Mission Services Evolution Center (GMSEC) system 642, 633. Publish adds an element to the message queue, thereby changing the state space of the system, and getMessage removes the element again, which reverses the change to the state space that publish performed.

FAULT MODELS: The inverse characteristic has the following fault models:

1.) Repeated calling: This fault model checks that the system behaves properly even if stressed by repeatedly calling function ?? and its inverse ??−1. This behavior identified an issue in the connect and disconnect functionality of GMSEC.

2.) Cleanup: This fault model is known in the literature as a sneak path 633. Fraunhofer uses the term cleanup instead because the term is more representative of the fault scenario. It first calls function ?? followed by its inverse ??−1. It then checks if the inverse function ??−1 correctly removed the changes from ?? by calling ??−1 again. This behavior identified an issue in the publish and getMessage functionality of GMSEC. It identified an issue where one published message could be received twice if the getMessage and getMessage ONB calls were in close succession. 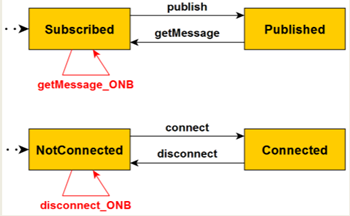