This topic discusses the relationship between the requirements and associated processes for NPR 7150.2, NASA Software Engineering Requirements,  039 and the content of NASA-STD-7009, Standard for Models and Simulation 272. Because NASA-STD-7009 is generally applicable to all types of models and simulations (which are most commonly embodied in software), it is important to understand its relevance to NPR 7150.2 and the precedence to be maintained between the two documents. Software developers can use this topic to understand the relevance and applicability of NASA-STD-7009 when developing software under NPR 7150.2.

NPR 7150.2 invokes the content of NASA-STD-7009 via requirement SWE-070 in the presentation of the requirement in its section 3.4.6 and the accompanying Note:

Note: Center processes address issues such as numerical accuracy, uncertainty analysis, and sensitivity analysis, as well as verification and validation for software implementations of models and simulations. Information regarding specific verification and validation techniques and the analysis of models and simulations can be found in the NASA standard NASA-STD-7009."

The applicability and scope are stated in section 1.2 of NASA-STD-7009, where the acronym "M&S" denotes "models and simulations":

NASA-STD-7009 applies to M&S used by NASA and its contractors for critical decisions in design, development, manufacturing, ground operations, and flight operations. (Guidance for determining which particular M&S are in scope is provided in NASA-STD-7009, section 4.1 and Appendix A. NASA-STD-7009 also applies to use of legacy as well as commercial-off-the-shelf (COTS), government-off-the-shelf (GOTS), and modified-off-the-shelf (MOTS) M&S to support critical decisions. Generally, for such M&S, particular attention may need to be paid to defining the limits of operation and to verification, validation, and uncertainty quantification. Programs and projects are encouraged to apply this standard to M&S, if the M&S results may impact future critical decisions.

2. Implications for Models and Simulations

2.1 Implications for Embedded Models and Simulations

As noted in the previous section, embedded models and simulations are not in the scope of NASA-STD-7009. 272  However, the note in NPR 7150.2A 039 implies that Requirement 4.2.6 and Requirements 4.4.1-4.4.9 found in NASA-STD-7009, nevertheless be addressed for such models and simulations. Each of these requirements begins with the phrase "Shall document." None of them requires that any specific activity be performed other than the relevant documentation. As the Standard states in section 4.1: "Whatever was done is to be documented, and if nothing was done a clear statement to that effect is to be documented."

2.2 Implications for Other Models and Simulations

Table 1 indicates the specific relationship of each requirement in NPR 7150.2A to NASA-STD-7009. The key to the remarks in the fourth column is

NASA-STD-7009  holds a unique place in the world of modeling and simulation in that it is, by direction, generally applicable to all types of models and simulations (M&S) and in all phases of development, though it is primarily focused on the results of an M&S-based analysis.  All standards and recommended practices for M&S to date have either been focused on a single type of M&S (e.g., structures, fluids, electrical controls, etc.) or a particular phase of M&S development (e.g., verification, validation, etc.).  NASA management is confronted with numerous types of analyses that may be involved in making critical decisions. Depending on the situation at hand, a common framework for understanding the results and assessing the credibility of that analysis may seem intuitive.  However, this is complicated by the vast differences in engineering systems, and, thus, the adoption of a standard like this has been slow.

Tools to aid in compliance with this Topic, if any, may be found in the Tools Library in the NASA Engineering Network (NEN).

The list is informational only and does not represent an “approved tool list”, nor does it represent an endorsement of any particular tool. The purpose is to provide examples of tools being used across the Agency and to help projects and centers decide what tools to consider.

The requirements for a NASA Standard have matured from the Columbia Accident Investigation Board (CAIB) Report.  The CAIB Report found problems pertaining to "ineffective and inconsistent application of M&S tools, along with cases of misuse."  It called on NASA to "develop, validate, and maintain physics-based computer models to evaluate Thermal Protection System damage from debris impacts. These tools should provide realistic and timely estimates of any impact damage from possible debris from any source that may ultimately impact the Orbiter." NASA was to establish impact damage thresholds that trigger responsive corrective action, such as on-orbit inspection and repair, when indicated. 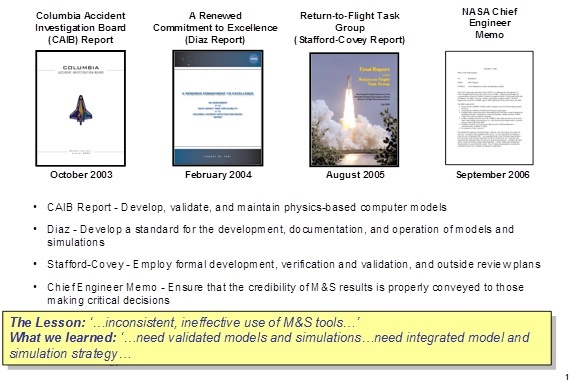 Lessons Learned and their applicability to the need to perform verification and validation are well documented in the above identified resources.  These should be reviewed and retained by any program or project utilizing Modeling and Simulation products throughout the Software development life cycle.

A documented lesson from the NASA Lessons Learned database notes the following:

"A 21% shortfall in Voyager's velocity change was suspected to be due to exhaust plume impingement. Due to the complexity of spacecraft/thruster configurations, additional care must be taken in the development and utilization of spacecraft and plume models. Analysis should be conducted on early and final designs." 582